After I bought my cordless angle grinder I thought I would try  build an air raid siren. I looked on line but there wasn't very much information except for one built by Matthias Wandel. I used some of his ideas but changed a few things since I wanted to make a smaller and  portable version. 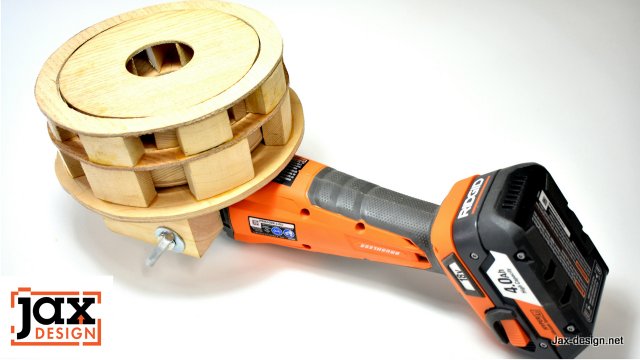 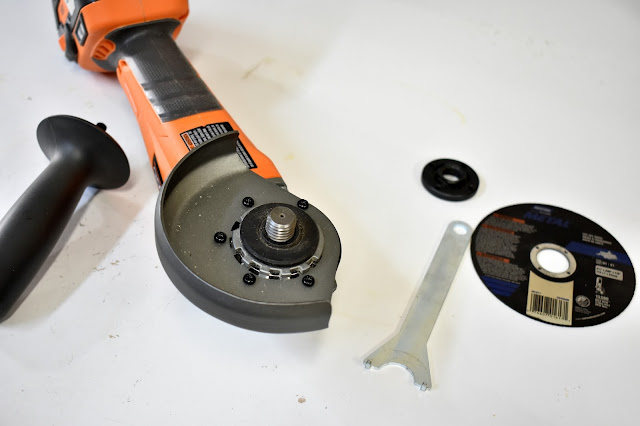 The first thing to do is take apart the angle grinder and see how  to secure a base before I start building the siren.

I took off as little as I could and still had enough to work with. 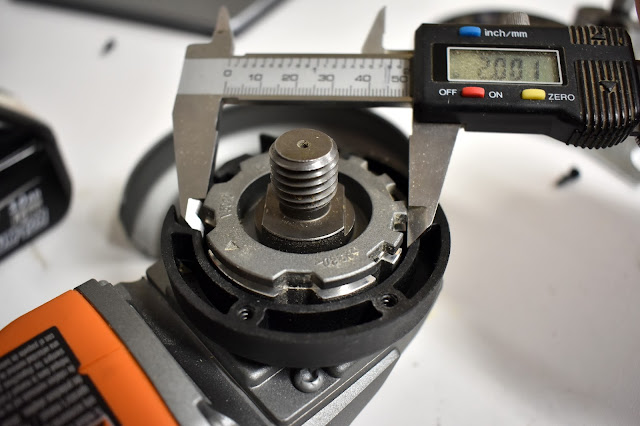 I measured the inner flange  shown above. The wooden base  will fit into it. It is 2 inches and the depth is 3/8". With this kind of support I now have a good idea how to proceed building. 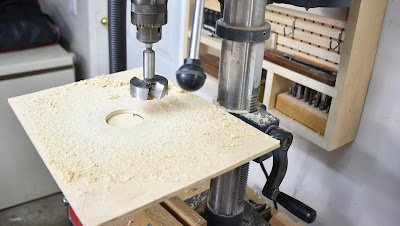 A 2 inch Forstner bit was used to drill a hole in a piece of 3/8" Baltic birch plywood . 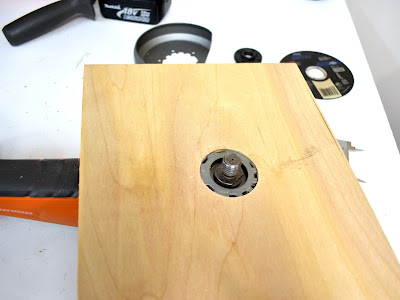 The base fit  perfect on the inner flange of the grinder. The base will be trimmed down later after the siren is made. 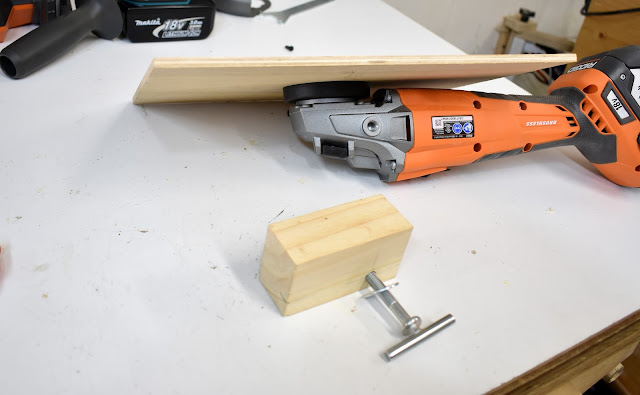 A block is cut and a hole drilled for a bolt that will fit in the side handle thread. This block and the flange screw will make it very secure and safe to operate. Also, it  will be very easy to put it together and take apart. 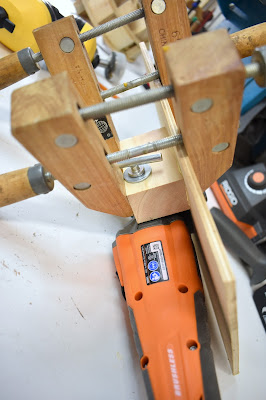 After the bolt was attached the block was glued and clamped together. I let it sit overnight to ensure a strong joint. 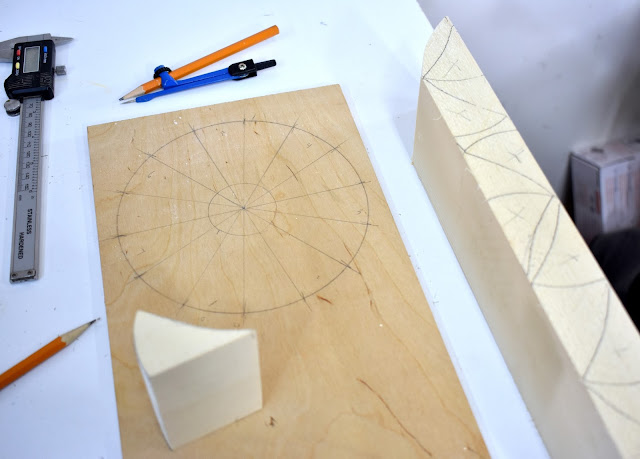 A circle was drawn and divided into 14 parts. Next I cut one blade and traced out seven more  blades on a 2x4. They were carefully cut with the bandsaw and then glued and clamped onto the base. 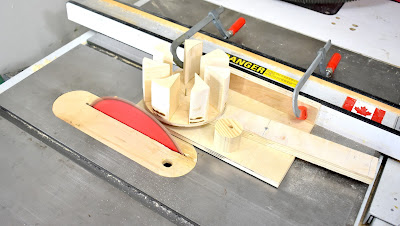 Note: the height of the blades were later reduced to 1 1/4".
My original plan was to use one set of blades and 2 stators but when I tested my first one it worked fine but it was rough. On my second attempt it exploded and blew the blades all over my shop. So I think 2 layers of blades with rings would work better.

A jig was made for the table saw to cut circles. The rotor centre was put on a nail and turned slowly on the saw, this will help make a clean circle. 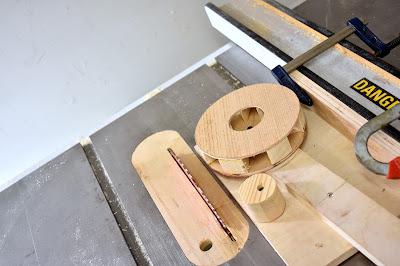 A ring was glued onto the blades and again it was cleaned up with the table saw. After this was done another set of blades and rings were glued on. The bottom has seven blades and the top has eight blades. 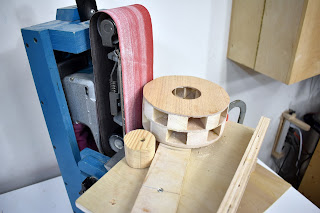 The same jig used on the table saw was clamped onto the belt sander and was sanded smooth. This will help with the balance. 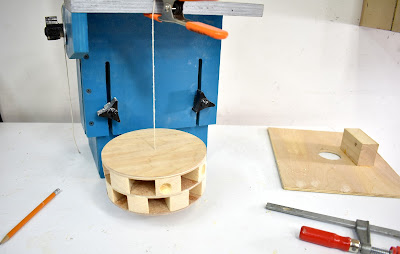 To make the balance better I tied a string from the rotor to my belt sander and gave it a spin. One end was off so I drilled a few holes in the blades on the heavy side. I spinned it again and it was balanced. 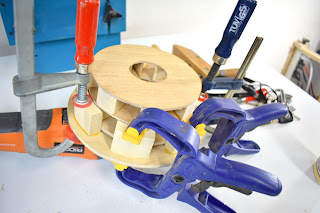 Seven blocks are carefully spaced and marked then glued onto the base, this will be the bottom part of the stator.

The base can be trimmed at this time. 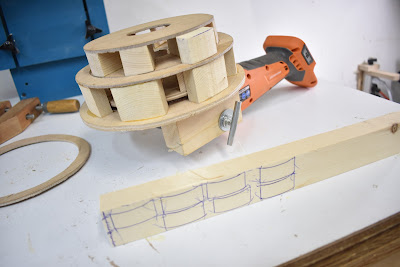 The same as the bottom , I traced the contour of the ring and marked curved blocks, they  are cut to make the stator. These blocks are a larger than the ends of the blades. 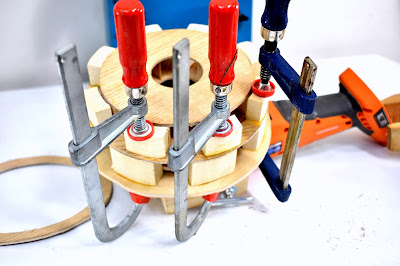 A  ring was glued on the first layer and the top part of the
stator was ready  for the 8 blocks. 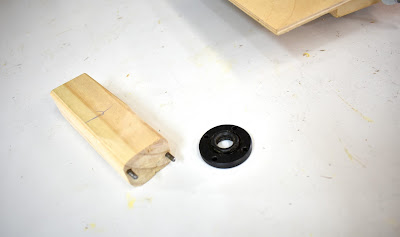 A spanner wrench would not work to turn the lock nut so I had to make my own tool. I used two nails,  put them in a block  and spaced them to match the lock nut.  By holding the spindle lock I was able to sufficiently tighten and loosen the lock nut. 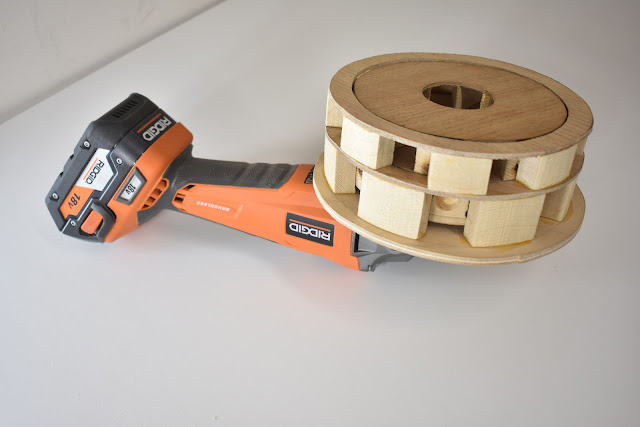 The siren turned out and just in time for halloween. It was easy to build and it did not cost anything to build.  It was made from scraps in the workshop and 1 bolt.

I will do some testing outside and check the sound levels.